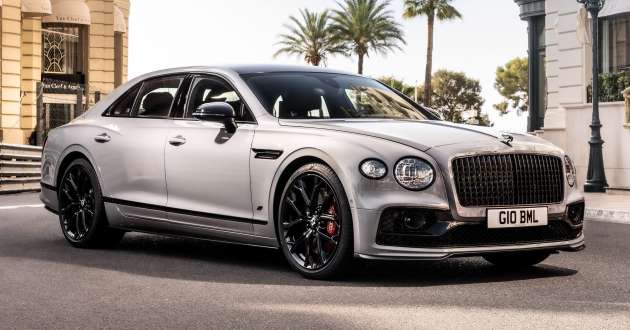 Bentley has unveiled the new Flying Spur S, which joins three models in the carmaker’s driver-focused S line-up, namely the

Bentley has unveiled the new Flying Spur S, which joins three models in the carmaker’s driver-focused S line-up, namely the Bentayga S, Continental GT S and Continental GTC S. As with those offerings, the four-door sedan receives several enhancements to give it a sportier character compared to a regular Flying Spur.

On the exterior, the Flying Spur S’ vertical-vaned grille and its surround are finished in gloss black, with the finish also applied to the lower apron, intakes, side gills, mirrors and tailpipes. The dark theme extends to the tinted headlamps and taillights, although the winged Bentley ornament, badge and lettering retain their bright chrome finish.

There are also red brake calipers behind the wheels, which comes in different designs and finishes, with sizes ranging from 21 to 22 inches, while S badging on the front fenders complete the exterior revisions. As for the interior, customers will have a choice of performance-focused two-tone themes featuring hand-crafted leather and suede-like Dinamica upholstery on the steering wheel, gear lever and seats. Sport seats are also standard and come with the ‘S’ emblem embroidered on the headrests, with Bentley wings being a no-cost alternative, although you’ll pay more if you want quilting.

Other details include new graphics on the instrument cluster that are inspired by those from the Continental GT Speed, along with a metal badge on the dashboard as well as the illuminated treadplates with the ‘S’ branding.

Unlike its siblings in the S range that only come with a V8 engine, the Flying Spur S is offered with both a V8 as well as a plug-in hybrid powertrain. The former is Bentley’s familiar 4.0 litre twin-turbo unit that puts out 550 PS (542 hp) and 770 Nm of torque, which comes standard with Bentley Dynamic Ride active roll stabilsation and all-wheel steering. 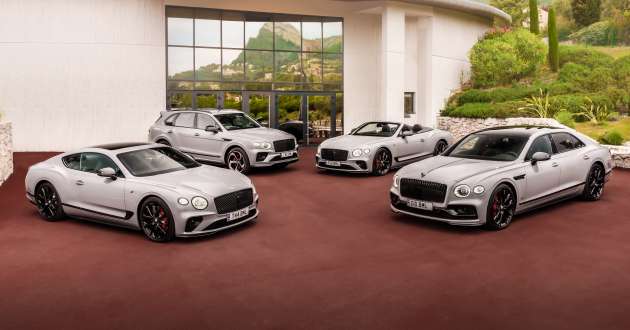 Meanwhile, the PHEV option is a first for a Bentley S model and is essentially the same system you find in a regular Flying Spur Hybrid. The setup consists of a 2.9 litre twin-turbo V6 with an electric motor sandwiched between the engine and standard eight-speed dual-clutch transmission for a total system output of 544 PS (536 hp) and 750 Nm. With its 14.1-kWh lithium-ion battery, the PHEV version offers up to 41 km of range in pure electric drive following the WLTP.

Customers who opt for the V8 will enjoy the sounds coming from a redesigned sports exhaust, while the Flying Spur Hybrid S gets “ingenious sound enhancements in the engine bay” that are audible when in Sport mode.