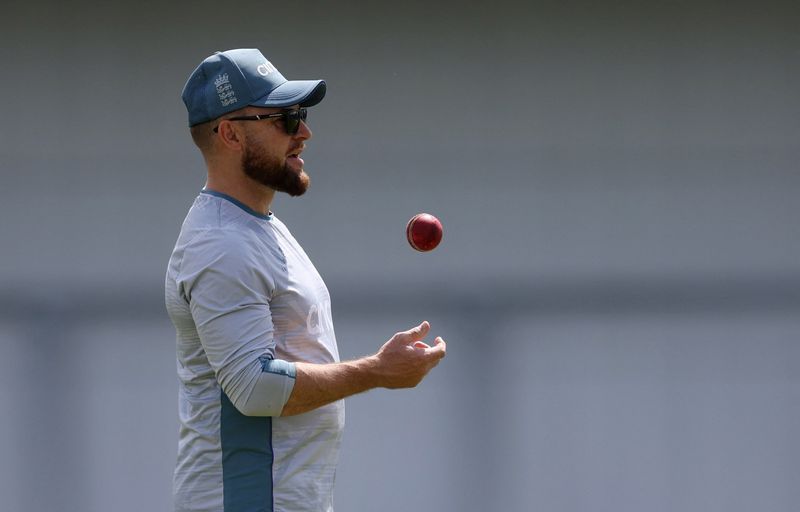 (Reuters) - England coach Brendon McCullum said his side's aggressive performances in their 3-0 series win over New Zealand set the alarm bells ringing around world cricket and that there would be no change of approach against India in their rearranged test.

England, who had been mired in a run of one win in 17 tests, brought in McCullum as coach and named Ben Stokes as their new captain in May and the duo have made an immediate impact with a more swashbuckling style of play.

After brushing aside reigning world test champions New Zealand, England take on India at Edgbaston from Friday in a rearranged test from last year's series. LONDON (Reuters) - Felix Auger-Aliassime became the highest men's seed to exit this year's Wimbledon on Tuesday when serve-and-volley specialist Maxime Cressy sent the Canadian sixth seed packing with a 6-7(5) 6-4 7-6(9) 7-6(5) win in the opening round.

Auger-Aliassime, who reached the quarter-finals of the grasscourt Grand Slam last year, failed to find a way to break Cressy's serve during the marathon contest that lasted four hours and 10 minutes.

"It's very disappointing, that's for sure," he told reporters.

"But I just need to face the reality. The reality is I lost today, and there is nothing I can do anymore, even though of course I had higher ambitions for this tournament.

"But in order to one day win a tournament like this, I need to be (Reuters) - Michael Vaughan has temporarily stepped down from commentary duties with the BBC, the former England captain said on Tuesday after he was embroiled in the racism controversy involving former Yorkshire player Azeem Rafiq.

Rafiq, a player of Pakistani descent, alleged that Vaughan told him and two other players of Asian origin that there were "too many of you lot, we need to do something about it" before a match in 2009. Vaughan has strongly denied the accusation.

Yorkshire County Cricket Club (YCCC) and a number of individuals were charged following an investigation into the claims.

Vaughan said the main reason he stepped down was "concern for the wellbeing" of his family.

"On numerous occasions, I have put on record my views on the i

Cycling: Cycling-Pogacar the man to beat as he chases third Tour title in a row 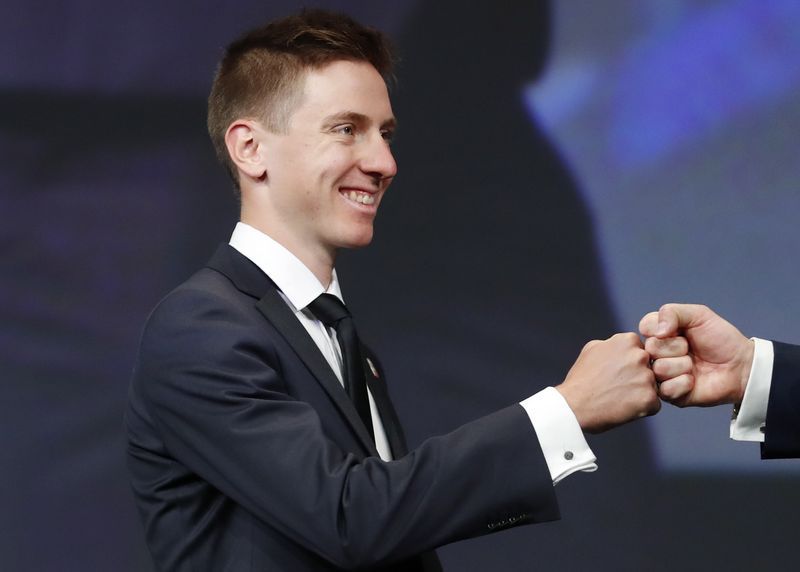 Paris (Reuters) - Tadej Pogacar will be the man to beat as he targets his third consecutive Tour de France title when the race sets off on Friday, with the 23-year-old Slovenian looking to become one of the sport's all-time great riders.

Dubbed the "Baby Cannibal" for his similarities to former five-time winner Eddy "The Cannibal" Merckx, Pogacar has already won the UAE Tour, the Tirreno-Adriatico and Tour of Slovenia stage races this season as well as the Strade Bianche one-day classic.

They will be trying to co A year after the American retired injured from what many feared would be her last Wimbledon match, her return had been eagerly anticipated but 115th-ranked Tan ripped up the script with a nerve-shredding 7-5 1-6 7-6(7) win.

With the Centre Court roof closed for the final two sets and the time approaching the 11pm Wimbledon curfew, Tan had one match point snatched away when the 40-year-old Williams served at 5-6 in a rollercoaster deciding set.

A weary Williams then appeared close to victory as she built a 4-0 lead in the 'super tiebreak'. LONDON (Reuters) - Playing her first singles match for a year after injury, Serena Williams' opening-round Wimbledon loss to Harmony Tan on Tuesday was hardly her most unexpected defeat, but there were plenty of signs it could be the most portentous yet.

Of course nobody goes on for ever, not even Williams who has performed numerous near miracles throughout a career spanning three decades.

Still, it made for uncomfortable viewing seeing the rusty seven-times champion a faded shadow of the player who has won 23 Grand Slam singles crowns.

For having long made a habit of seeing off lesser mortals while cruising at barely half pace, on Tuesday there seemed nothing to dig into, no extra gear, nor any aura to lend an advantage. 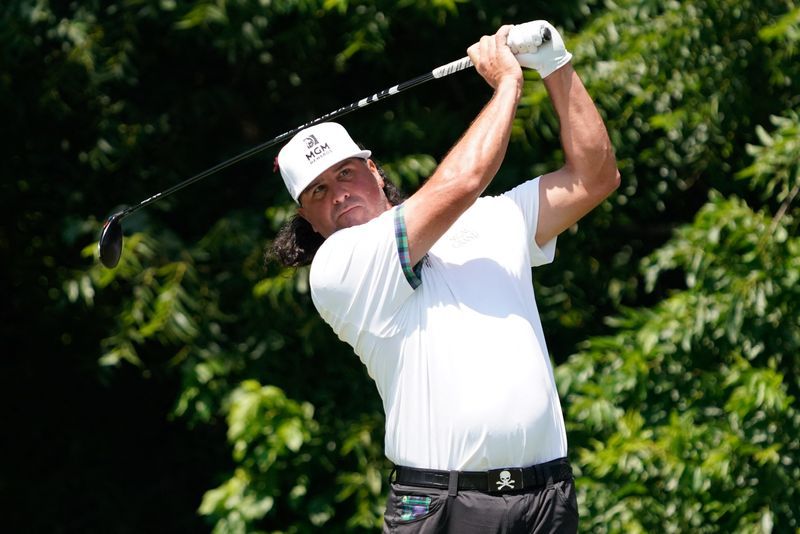 (Reuters) - Americans Pat Perez and Patrick Reed said on Tuesday the PGA Tour had only itself to blame for losing players to the Saudi-backed breakaway LIV Golf Invitational Series, ahead of a tournament at Oregon's Pumpkin Ridge Golf Club.

Sitting alongside four-times major winner Brooks Koepka, Perez and 2018 Masters winner Reed ripped into the PGA Tour and its commissioner, Jay Monahan, and said the blame for their departure lay at the feet of the golf organizing body.

"Monahan just shut it out from the start. Didn't want to listen, didn't want to take a meeting," said Perez, a 46-year-old, three-time PGA Tour winner. LONDON (Reuters) - American John Isner could seal his legacy as the best server in the game on Wednesday with the all-time aces record in his sights but standing in his way at Wimbledon is a man with a reputation for taking on big servers, Andy Murray.

There would be no better place to do it than Centre Court but the 37-year-old American has lost all eight times he has played twice Wimbledon champion Murray. They have never met on grass, however.

"Andy is a different animal. He's much harder to ace because his anticipation is just amazing," said Isner, who fired down 54 aces in his five-set first-round win.

Boxing: Boxing-Tommy Fury says he was denied entry into U.S. for press conference (Reuters) - Tommy Fury on Tuesday said he was barred at Heathrow airport from boarding a plane bound for the United States for a press conference to promote his Aug. 6 bout against Jake Paul.

"Me and my team this morning arrived at Heathrow airport ready for the press conference, ready to fly out, and as soon as I entered the airport I got pulled to one side and I was told by a Homeland Security officer that my ESTA (travel authorization) had been denied and I wasn't able to travel to the USA," he said in a video posted to social media.

Fury said officials at the airport told him that he knew the reason he was being denied entry into the United States. The 23-year-old Briton said he had no knowledge of why he may have been denied entry. RZESZOW, Poland (Reuters) - Hungary's hopes of qualifying for the 2023 Women's World Cup ended in a 2-0 defeat to war-torn Ukraine on Tuesday.

Ukraine, who are playing their games in Poland due to Russia's invasion of their country, were made to feel at home by their supporters, many of whom are refugees, in the Polish city of Rzeszow located about 100km from the Ukrainian border.

Ukraine, whose own World Cup qualifying hopes were ended in a 4-0 loss to Scotland on Friday, took the lead in the 27th minute when defender Darya Kravets headed in from a corner.

Substitute Olga Ovdiychuk doubled their advantage with an individual effort, sealing the result just before fulltime.

Hungary are third in Group B on nine points, four behind second-placed