There is a small piece of Ukraine in the lush greenery of Brazil's deep south.

You can find Prudentopolis thanks to a sign with a dome-like tower typical of Ukrainian churches, the town's name written in Latin and Cyrillic.

Brazil's "Little Ukraine" was named after its Byzantine architecture and for inhabitants whose roots stretch back to eastern Europe generations ago.

They are now welcoming people who have just arrived in Brazil, fleeing Russian attacks on Ukraine.

So far, the South American country has accepted some 200 refugees and several dozens have come to Prudentopolis.

"I knew nothing about Brazil and imagined indigenous people and rainforests," says Anastasia Ivanova, 22, who fled with her mother and sisters.

How Brazil’s ‘Little Ukraine’ community is getting bigger every day

There is a small piece of Ukraine in the lush greenery of Brazil’s deep south.

You can find Prudentopolis thanks to a sign with a dome-like tower typical of Ukrainian churches, the town’s name written in Latin and Cyrillic.

Brazil’s “Little Ukraine” was named after its Byzantine architecture and for inhabitants whose roots stretch back to eastern Europe generations ago.

They are now welcoming people who have just arrived in Brazil, fleeing Russian attacks on Ukraine.

So far, the South American country has accepted some 200 refugees and several dozens have come to Prudentopolis.

“I knew nothing about Brazil and imagined indigenous people and rainforests,” says Anastasia Ivanova, 22, who fled with her mother and sisters. A view of Prudentopolis, a remote southern Brazilian town with a large Ukrainian community.

“I didn’t even know what language was spoken in Brazil,” she says, sitting in a flat in the centre of Prudentopolis. It was all the more surprising for her to hear that Ukrainian is the city’s second official language.

Prudentopolis is tranquil with dozens of churches whose onion-shaped domes can be seen across the town. Some three quarters of the 53,000 inhabitants have Ukrainian roots.

In all, there are some 600,000 people of Ukrainian descent in Brazil, most of whom are based in the south.

Rodrigo Michalovski, 31, is one of many who grew up hearing tales of how his parents, grandparents and ancestors arrived, he says.

The first immigrants arrived from Galicia – a historical and geographic region spanning what is now south-east Poland and western Ukraine, not to be confused with the autonomous community in northwest Spain – in the 1890s, drawn by the offer of fertile agricultural lands. Later, Brazilian cities also took in refugees during World War II. The entrance gate of Prudentopolis, also known as ‘Little Ukraine’, features a dome-like tower typical of Ukrainian churches as well as the town’s name written in Latin and Cyrillic.

The locals are now receiving a new wave of people seeking safety.

“We have been welcomed here in a way we did not expect,” says Ivanova, who is upbeat, delighted at how bright her new flat is. She and the others have received a warm welcome; there are Ukrainian flags waving on many of the buildings.

Ukrainian culture and language have been thriving in Prudentopolis for generations, thanks to the town’s remoteness and people’s strong sense of faith.

“I have a lot of love for my homeland,” says Adelia Bohatchuk, 85. By homeland, she means Ukraine, despite the fact that she has been living in a traditional Ukrainian house in Prudentopolis since the age of one.

“When we left Kharkiv, we didn’t know where we were going,” says Ivanova, as her sisters Sofia, 13, and Ruslana, six, draw closer to their mother on the couch. Byzantine architecture meets Brazilian palm trees: The Nossa Senhora do Patrocinio church in Prudentopolis is a contrast of styles.

Back in Poltava, in the heart of Ukraine, they had heard that a group had found a warm welcome in Brazil.

That did not make their decision to flee much easier, with Ivanova reluctant to leave home right until the last minute. But they wound up boarding a bus on a journey into the unknown.

At the other end of the world, it feels pretty foreign, even though sights like eggs decorated in the traditional Ukrainian style, known as pysanky, give a flavour of home to Ivanova.

Meanwhile in the Clube Ucraniano, the town’s group of folk dancers, Vesselka, meets almost every day for rehearsals. The spirit of Ukraine is aided by a treasure trove of traditional costumes and a gallery of chairpersons that includes a picture of Ukrainian President Volodymyr Zelensky. Fernando Demenech, who leads the local Ukrainian folk dance group in Prudentopolis, showing the traditional embroidered costumes which are worn during performances.

“It feels like a personal attack for us, as if our neighbours were massacred and our garden destroyed,” says Michalovski, a member of the troupe, about the war in Ukraine while leafing through the embroidered garments kept backstage. They are worn at the festivals and fairs hosted in Prudentopolis.

Michalovski is a dentist and has been to Ukraine several times. In recent weeks, he’s been practically acting as an ambassador for the town.

He and others are trying to ensure his compatriots feel welcome, ever since the beginning of the Russian invasion of Ukraine on Feb 24.

Mayor Osnei Stadler extended an invitation to Ukrainians, while the Brazilian government is issuing humanitarian visas.

Stadler is hoping that the newcomers will settle in easily while strengthening the town’s Ukrainian heritage. He wants them to stay, make it their homeland, just as migrants did in the past. 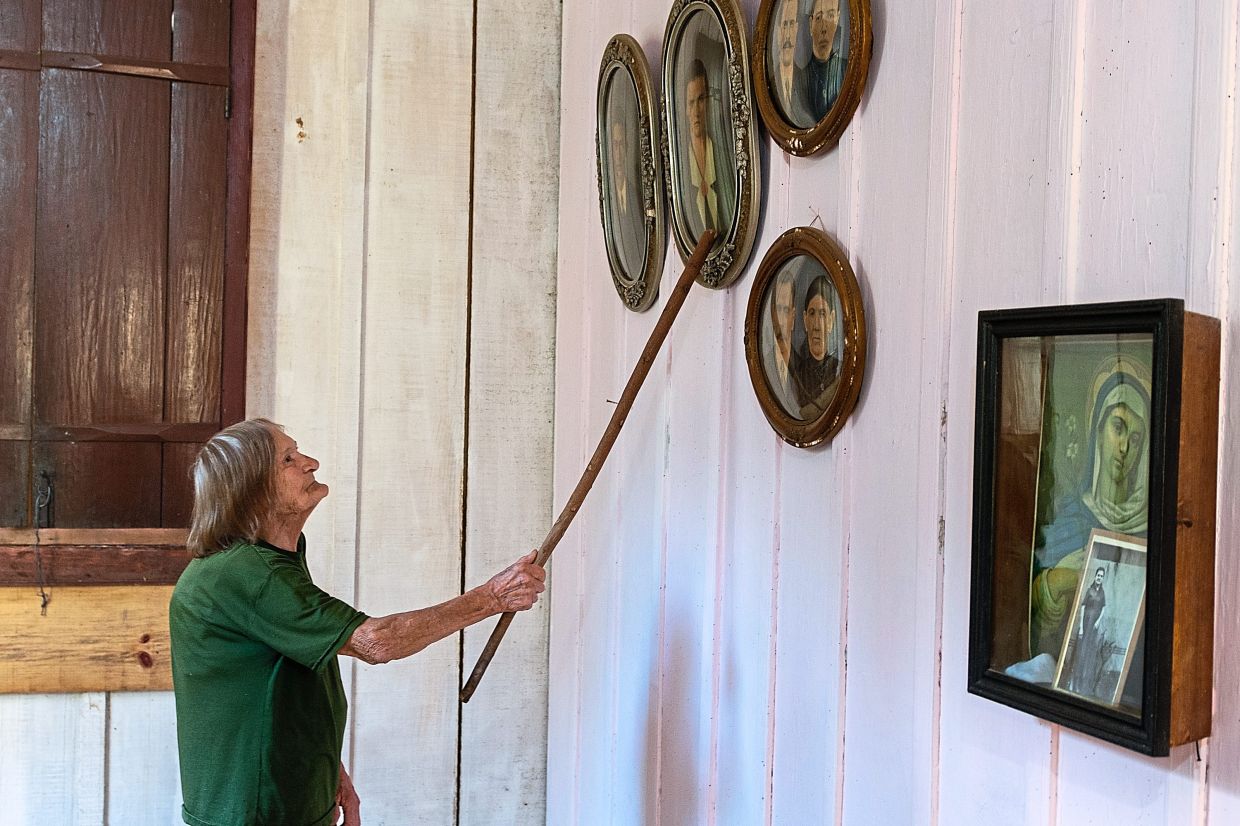 Bohatchuk showing the paintings she inherited from her Ukrainian ancestors who came to Brazil in the 19th century.

“We don’t plan much, we live in the here and now,” says Ivanova.

Her sisters have now started school in Prudentopolis, where bilingual classes are on offer.

Singing teacher Ivanova, now a member of the church choir, had never travelled beyond Ukraine’s borders before being forced to flee the Russian invasion. She hopes to make a trip to Rio de Janeiro and Sao Paulo sometime soon.

“Initially, I thought I was only going to Brazil to wait until the war was over,” says Ivanova. But something broke inside her when her hometown Kharkiv was bombed, she says.

Her mother is making pelmeni for lunch, Ukrainian dumplings that are served in the restaurants of Prudentopolis, filled with Brazilian black beans.