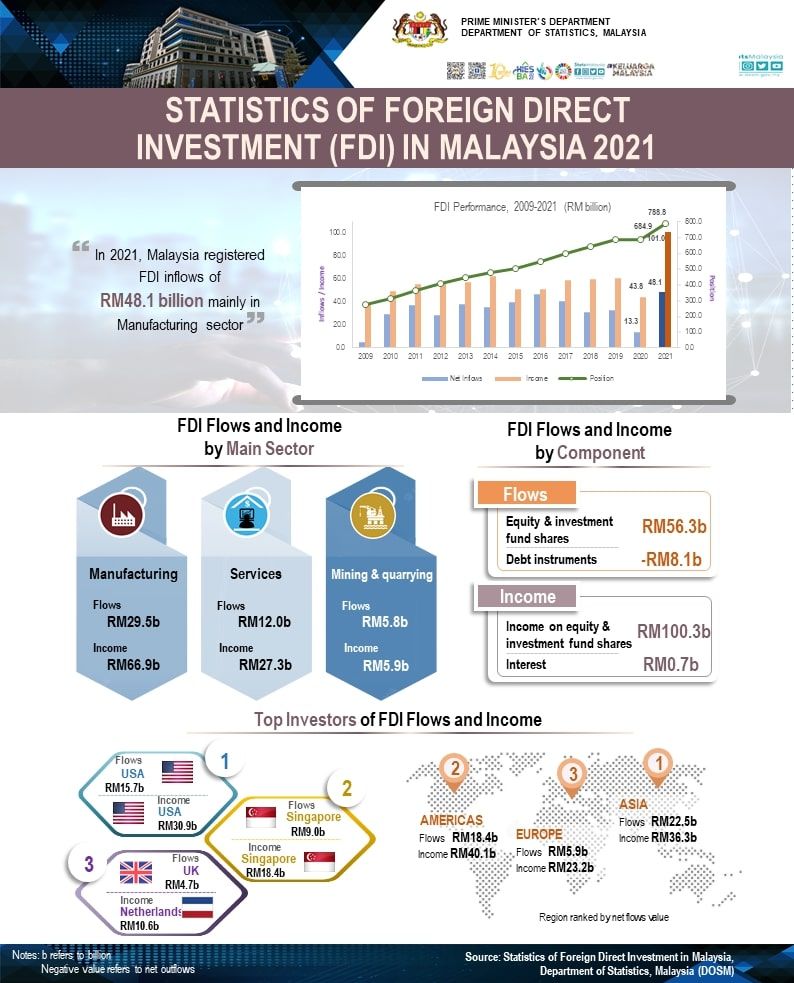 Based on the World Investment Report by the UN Conference on Trade and Development, FDI flows to developing countries in Asia rose by 19 per cent to US$619 billion in 2021.

“As such, the foreign investment into Malaysia in 2021 rose to register RM48.1 billion, the highest since 2016,” he said in a statement.

Commenting further on the FDI performance by sector, Mohd Uzir said the manufacturing sector expanded by RM22.5 billion to record net inflows of RM29.5 billion which attributed to the largest flows in FDI.

The manufacturing sector attracted 61.4 per cent of total investment, particularly in electrical, transport equipment and other manufacturing subsector.

Meanwhile, services were the second highest contributor mainly in financial activities, followed by the mining sector which received equity and investment fund shares.

Elaborating further on Malaysia’s investments with more than 190 countries, Mohd Uzir said Asia region continued to be the top source of FDI in Malaysia for 2021 with net inflows of RM22.5 billion, mostly from Singapore, Japan and South Korea which amounted to RM17 billion.

The Asia region has been the predominant source for FDI with RM413.1 billion,

As of the end of 2021, FDI has increased by RM103.9 billion, accumulated to RM788.8 billion. The services sector remained the largest recipient at 49.2 per cent or RM388.4 billion, driven by financial and wholesale activities.

This was followed by the manufacturing sector which accounted for 42.2 per cent of total FDI, particularly in electrical, transport equipment and other manufacturing subsectors.

“Similar to FDI performance, the DIA flows rose by RM9.5 billion to RM19.7 billion owing to higher investment in the manufacturing and services sectors.

Manufacturing overtook services as a primary sector for DIA, contributing 40.5 per cent of the total investment, especially in electrical, transport equipment and other manufacturing subsector.

Meanwhile, the services sector contributed 30.3 per cent, particularly in financial activities. Europe was the leading region of DIA flows in 2021 with 54.9 per cent notably in the Netherlands and the United Kingdom.

“Overall, these investments were mainly channelled to the Netherlands, Canada and Indonesia,” he said.

DIA flows were predominantly in the form of equity & investment fund shares with a share of 61.7 per cent attributed to higher profit retained abroad albeit lower outflows in equity.

In the meantime, debt instruments recorded higher net outflows as a result of activities in trade credit.

As of the end of 2021, the DIA position stood at RM547.0 billion from RM515.1 billion in the preceding year in which Singapore, Indonesia and the United Kingdom remained the top three destinations for investors. – Bernama