Like most people on social media, Valerie (not her real name) finds comfort in using beauty filters to enhance her appearance.

Since adapting to beauty filters, the 25-year-old from Kuala Lumpur says she can no longer post unedited or unfiltered images of herself online.

“I can achieve a particular look by modifying my skin tone and parts of my face or figure. I feel it’s impossible to achieve this ideal look I show through social media as quickly in real life,” she says.

Believing that beauty filters gave her a fairer complexion that made her look better, Valerie would apply makeup to look the same way.

However, one particular beauty filter got stuck in her mind, making Valerie seek a lasting solution to look more like her “filtered self”.

“I felt that I would look better with a higher nose bridge. So I

The ugly truth about beauty filters

Like most people on social media, Valerie (not her real name) finds comfort in using beauty filters to enhance her appearance.

Since adapting to beauty filters, the 25-year-old from Kuala Lumpur says she can no longer post unedited or unfiltered images of herself online.

“I can achieve a particular look by modifying my skin tone and parts of my face or figure. I feel it’s impossible to achieve this ideal look I show through social media as quickly in real life,” she says.

Believing that beauty filters gave her a fairer complexion that made her look better, Valerie would apply makeup to look the same way.

However, one particular beauty filter got stuck in her mind, making Valerie seek a lasting solution to look more like her “filtered self”.

“I felt that I would look better with a higher nose bridge. So I decided to get a nose job,” she says.

Valerie decided to try thread lift, a non-surgical procedure in which polydioxanone (PDO) threads are inserted through the tip of the nose to strengthen and refine the bridge.

The process has been described as a “lunchtime nose job” by beauty publications, as the process is said to be relatively quick.

Although the procedure can be completed in as little as 30 minutes, the effect is not permanent, as the threads dissolve in about two years.

According to the website, The Skin, the procedure is preferred by people wanting to achieve the so-called “Instagram Face” – poreless skin, high cheekbones, pouty lips and defined jawlines – made popular by models and media personalities like Kendall Jenner and the Kardashians.

Valerie spent six months deciding on an aesthetic clinic for the procedure.

“It wasn’t as painful as I thought it would be,” she says, adding that she is pleased with the outcome and is considering a procedure to enhance her eyelids.

Fiona Yassin, clinical director at The Wave Clinic, a specialist treatment centre for addiction, eating disorders and mental health issues, is concerned that social media is bolstering the use of beauty filters, making people believe in unrealistic beauty standards. Fiona is concerned that the widespread use of beauty filters is making people believe in unrealistic beauty standards. — FIONA YASSIN

“This is what happens when the line between fantasy and reality is blurred to the point that someone feels they can no longer be themselves unless they change their personality or physical appearance.

“Some feel compelled to re-create the experience in real life so that they can experience the feeling beyond social media,” she explains.

According to her, social media platforms introduced filters as a means to increase engagement, encouraging people to try them out and share the results.

“The shared experience paved the way to other filters that allowed people to enhance their features, including whitening their teeth, decreasing the bridge of their nose or changing the shape of their eyes,” she says.

Also, every time someone uses a filter to change their look, they are likely to get “rewarded” with likes from their friends.

“People usually respond positively to this system, prompting them to post more content in order to experience warm fuzzies, or feelings that tap into their sense of happiness,” she says.

What’s more, Fiona adds, the experience is not limited to social media, as video games also allow players to take on different personas through the characters they play.

Viren Swami, professor of social psychology at the School of Psychology and Sport Science at Anglia Ruskin University in the United Kingdom, points out that there is ample evidence to suggest that people who are dissatisfied with their appearance are more likely to use beautification tools. Prof Viren points out that people who are dissatisfied with their appearance are more likely to use beautification tools. — VIREN SWAMI

“The tools seem to be fulfilling some kind of need by helping people enhance their appearance,” he says, adding that research also suggests that using beauty filters regularly may make one feel more dissatisfied about his or her appearance.

Over time, he continues, they are likely to develop a sense of anxiety about their appearance.

“The reason being that once users have seen an idealised version of themselves, they may feel that their current appearance is no longer as good,” he explains.

Not only those who use the filters are affected, but those who regularly view such content will also engage in social comparison.

“They end up feeling inadequate. Then they start to internalise what they think are the underlying messages behind these images, with some popular narratives being ‘I need to work on my body’ or ‘I need to look like them’,” Prof Viren adds.

A social media user who only wanted to be identified as Jane describes beauty filters as “a lifesaver”.

She applies filters or touches up most of the photos she shares online, particularly close-ups of herself.

“Most people want to feel pretty. I use them whenever I don’t have any makeup on or if I feel that my complexion doesn’t look good on that day,” says the 21-year-old.

She contends that it has become the norm to use beauty filters as her peers use them all the time.

“They look really beautiful in the photos and I feel that I need to look like that as well.

“I don’t feel weird about using it anymore. It doesn’t feel fake,” she says.

Like Valerie, Jane finds it hard to go back to posting unedited images of herself on social networks. 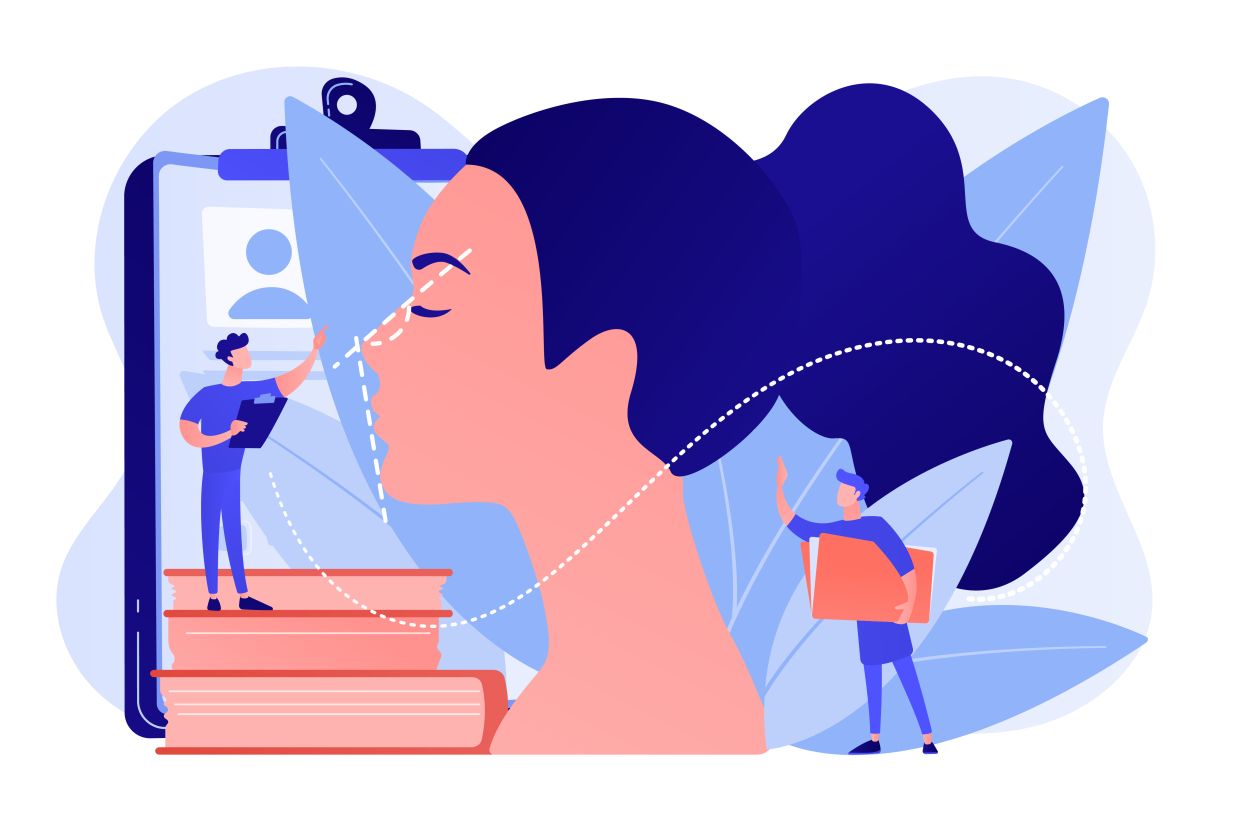 “I can’t imagine how it was before I started using all the filters and features. Now, I always feel the need to beautify the photos I put out there.

“Sometimes I feel the filtered version is my true self. Then there are moments when it hits me that I don’t look like my filtered photos.

“Whenever I look at photos of myself without the filters, my first reaction would be, ‘Is there something wrong with the camera?’” she says.

Jane sees her beauty-filtered photos as motivation to go on a weight loss journey and learn better make-up techniques.

“For now, I’ve not considered getting cosmetic surgery, but I dare not say that it will not cross my mind in the future,” she adds.

In Valerie’s case, she wouldn’t have had the courage to go through the threading lift procedure if not for the beauty filters.

“It’s sometimes shocking to me when I come across unedited photos in which a person’s flaw is easily visible,” she says.

perception, and she believes that social media platforms could amplify their feelings further.

She cites a young woman with a history of extreme eating disorder who was working towards healing.

Fiona was assisting her in understanding the issues underlying the disorder but the patient started to doubt herself again once beauty-filtered images began appearing on her feed.

“She started manipulating her images regularly to change her bust size, nose and waist. In essence, it was a warning sign to us,” Fiona says.

Her advice to anyone feeling overwhelmed by online content is to leave social media.

“When you realise that this is getting a bit much, hurting someone else around you or even yourself, then it would be a good time to ditch social media and move away from it,” she adds.

At her treatment centre, Fiona recommends a “no electronics” policy during the recovery stage.

As patients near the end of treatment, they will gradually be introduced to social media once more.

“We will advise deleting all previous accounts and starting again because it’s not just you and your images that could be the problem.

“You are also likely to be following other people who are doing the same,” she explains.

The potentially harmful effects of beauty filters on self-perception and body image have not gone unnoticed, as social media platforms have initiated changes.

In 2019, Meta’s Instagram announced that it will remove all augmented reality filters associated with cosmetics surgery from its platform.

The announcements came amid concerns over filters, which were mostly made by users through tools provided by the platforms, that depicted how people would look if they underwent plastic surgery, even showing the procedure markings that would be made by a surgeon.

Snapchat, on the other hand, doesn’t prohibit its users from making face-altering or beautifying filters, but claimed in a report that it had hired an in-house sociologist to assess the impact of its product and features on its users.

Countries have also taken initiatives to combat body dysmorphia, a mental health condition that causes individuals to spend a significant amount of time worrying about imperfections in their appearance.

Norway passed legislation in June of last year requiring influencers to include a label if the people in their promotional posts on social networks were retouched. Those who don’t comply will face penalties.

“Our goal is that children and young people grow up without experiencing pressure to change their bodies,” said Reid Ivar Bjorland Dahl, the country’s state secretary with the Ministry of Children and Families, in a statement to The Washington Post.

The Advertising Standards Authority (ASA) in Britain has also issued a guideline requiring influencers and advertisers to avoid applying misleading or exaggerated filters to content used to promote products online.

ASA has taken action against influencers who applied beauty filters to alter their skin tone and complexion in Instagram stories to promote tanning products by asking them to remove the content from the platform.

But are these measures enough to counter the potentially harmful effects of beauty filters? Prof Viren believes that people should start by first changing their perception of beauty, which could have been formed incorrectly as a result of their upbringing or own preconceived notions.

It’s also crucial to talk to children early on as they may be receiving mixed messages about what is beautiful, he adds.

Prof Viren concludes that real change has to come from dismantling the structures in society that dictate the perception of beauty.

“Social media is merely a reflection of what is happening in society. To tackle problems on social media without addressing what is going on in the wider society will be missing the point,” he says.

Share
Previous The Papers: G7 urged to back Ukraine as leaders mock Putin
Next Cooperatives in Selangor to gain from assistance