Up to 1,200 civilians may be in plant in eye of Ukraine battle, separatist says 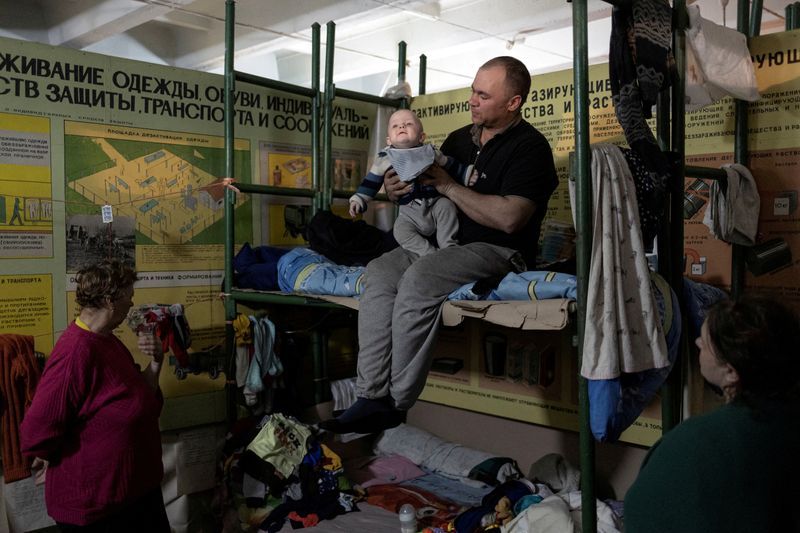 LONDON (Reuters) – Up to 1,200 civilians may be holed up in the shelters of the Azot chemical plant in the eastern Ukrainian city where one of the fiercest battles of the war has been raging between Russian and Ukrainian forces, a Russian-backed separatist said.

Russian forces are trying to grind down Ukrainian resistance in the eastern city of Sievierodonetsk, part of a wider push to drive Kyiv’s forces out of two separatist regions which Russia backs and has recognised as independent states.

Russia on Wednesday said it had opened a humanitarian corridor out of the sprawling ammonia factory founded under Soviet leader Josef Stalin, to a separatist-controlled town.

“About 1,000 to 1,200 civilians of Sievierodonetsk may still be on the territory of the Azot chemical plant,” Rodion Miroshnik, an official in the Russian-backed self-styled separatist administration of the Luhansk People’s Republic, said on Telegram.

Miroshnik said the civilians are in part of the plant that is still controlled by Ukrainian forces, which he said numbered up to 2,000 people including Ukrainian and foreign fighters.

Russia on Tuesday said it dismissed a Ukrainian request for a humanitarian corridor to evacuate civilians from the plant to Kyiv-controlled territory, citing the destruction of the last bridge across the Siverskyi Donets river which blocks the city’s eastern exits.

“We offer the militants of nationalist battalions and foreign mercenaries located at the Azot plant to cease any hostilities,” the defence ministry said.

Russia’s defence ministry said what it said were Ukrainian “militants” had deliberately led civilians into the Azot plant and was using them as human shields.

Reuters was unable to verify that claim. Ukraine has denied Russian claims that it uses civilians as human shields.

Russia’s humanitarian corridor northwards to the city of Svatove will be open until Wednesday evening, the defence ministry said.

President Vladimir Putin has repeatedly said that the main immediate reason for what he casts as a “special military operation” was to protect the Russian-speakers of Donbas from persecution and attack by Ukraine.

Ukraine and its Western backers say Russia is waging an unprovoked war against a sovereign state which is fighting for its existence. Kyiv says Russia’s claim of persecution of Russian-speakers is a baseless pretext for the invasion.

The conflict in eastern Ukraine began in 2014 after Russia annexed Crimea, with Russian-backed forces fighting Ukraine’s armed forces. About 14,000 people were killed there between 2014 and 2022, when Russia invaded Ukraine, according to the Office of the U.N. High Commissioner for Human Rights.